After a well slept second night in Rome, we were eager to take in another day of magnificent buildings and history information. If Vatican City is one clear site to visit, the maybe second most was on the program today.

Up and on the move before 9:00pm to get to the yesterday missed Basilica di San Pietro. We thought we would be early and maybe wouldn’t have needed to queue for that long, but got a surprise when arriving to the piazza. The line was already almost a full round of the whole piazza. 9:15pm we started at the end of the line, and 10:10pm we entered thru the massive entrance to the basilica. So “only” one hour of waiting, including the security check. If looking at the structure from the opposite side it seemed smaller then I thought, you truly got overwhelmed when entering. It is so large, with so very much to look at.

As the Easter Sunday preparations were in full swing there was some areas closed off, but there was a small surprise when going further in. The whole left side of the basilica was closed, and at a closer look, there was a large amount of suited up men with earphones in one ear, looking very official. The reason was reveled to us when in one of the side chapels there was some sort of ceremony going on. After some investigation back home it came to our knowledge the Cardinal we had seen was Francis Arinze (origin from Nigeria), who is fourth in the hierarchy, and was back in 2005, at the latest Pope election, one of the likely or possible  cardinals to be chosen as next pope. Of course now we know that Jorge Mario Bergoglio (origin from Argentina) was elected and he took the name of Pope Francis.

Pictures in this post can be enlarged by clicking on them, and captions can be seen with hovering over the picture or opening them.

At this destinations visit, we also got to see the first time real Swiss Guards, and as much as they look funny, they are equally impressive.

A beautiful house near our hotel.

The wall/pathway between Castel Sant’Angelo and Piazza San Pietro 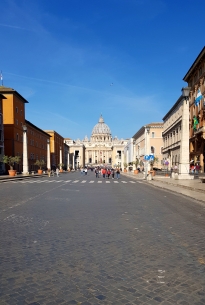 And at this point we understood there was going to be some waiting.

Had time to take another selfie of us when queueing.

Beautiful ceiling before even entering the basilica 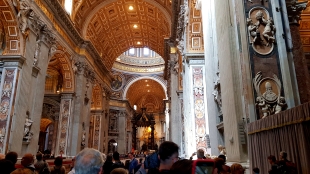 And upon entering my jaw dropped.

So decorative and beautiful. 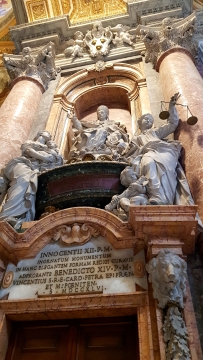 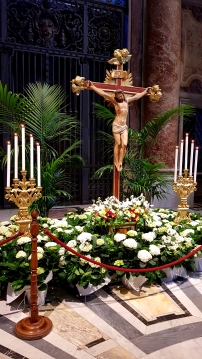 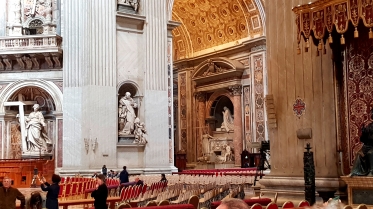 At the main altar there were something other going on as we were there.

The ceremony where we saw Cardinal Francis Arinze. 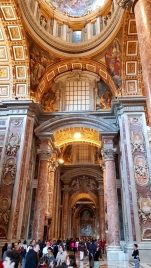 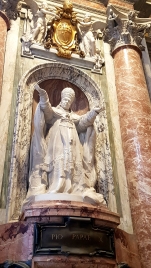 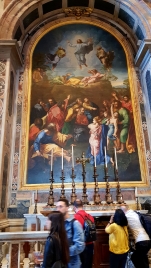 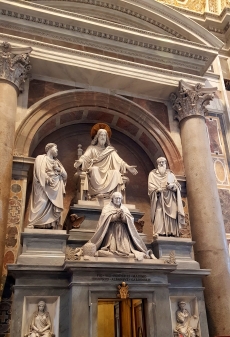 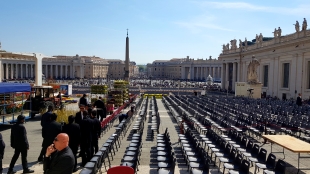 Picture from the stairs out towards Rome.

The balcony where Pope Francis would come out the next day on Easter Sunday.

The Swiss Guards at the entrance to a yard behind the basilica.

Although a bit funny looking, I would not want to see him charging me with that lance.

Between the columns on the right as we were heading to next site at our days program.

After the first destination of the day, we headed for a bit earlier lunch then then the day before. We found a pretty nice place just on the other side of the river Tiber. The waiter asked if I wanted my bear normal or large, and I chose large…and it was LARGE! We both ate a salad which were good, but the lunch itself dragged out a bit due to my beverage. 😀 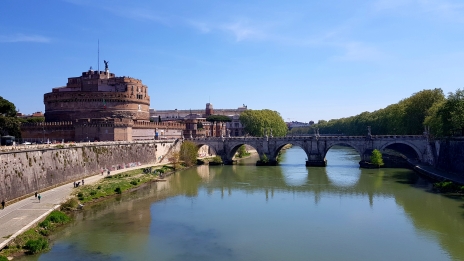 Making up with a salad because of the large beer.

After lunch I had one destination in mind, but on the way we “stumbled upon” another, and it was a big one, literally BIG one. As we were walking towards Foro Romano and the Colosseum, we encountered Altare della Patria. As I saw it, I remembered to have heard about it and seen pictures of it, but had totally forgot about it before the trip. It was a nice surprise and the pompous of the structure was worth the climb up as high you could go. It looks like a very very old roman structure, but we were surprised to find out it according to it’s Wikipedia page it was completed as late as 1935.

We climbed up on the hill behind it as well to take a look at a square Campidoglio,  which is designed by Michelangelo, and is lined with museums & offering views of the Roman forum. Between the lunch restaurant and the Altare della Patria we enjoyed to see the small alleys and even saw trams, which I did not knew there was in Rome.

Alleys are beautiful, and in some towns I’ve visited, they are deserted, but in Rome they weren’t that much.

Italian tram. Did not know they existed.

A pleasant surprise on the way to Colloseum.

Pretty hot work although they stand in the shade, and now it was only April and 22″c. 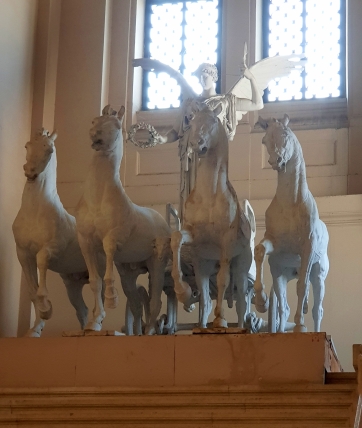 View from the top of Altare della Patria.

At this point we set off to the last stretch towards Colosseum, and already it in our view, we decided to take a gelato break. The second for my wife, and the first for me during the trip. Italian ice cream was one of the “must have’s” for this trip. 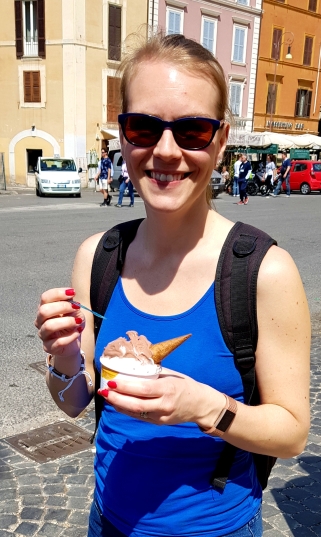 This is one secure way to get my wife to be happy.

As we arrived pretty late to the Colosseum there was lines, veeeery long lines. And as a guided tour around the destination would have been in our mind pretty much, we decided to skip the entrance this time. Pictures was taken and we walked around it admiring the structure that was finished 1939 years ago, wow. How did they manage to build something that marvelous? 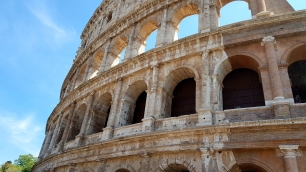 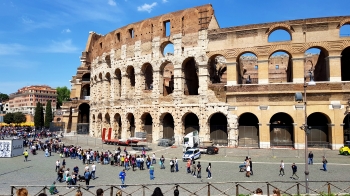 In this picture you see the beginning of the queue, and the entrance was on the other side.

Been there, not inside but gazed and pondered on how they could build something this marvelous.

After looking and admiring this huge construction we started to walk back towards hour hotel, with a little detour via Palazzo del Quirinale. This is the former royal & papal residence, now the presidential palace & museum. Sadly the museum was not open so we could not enter to have a look, but admiring the beautiful buildings nonetheless. According to Google maps, there should have been “on piazza offering city views.”, which we did not see and do not agree on. But still worth a climb up the hill still. 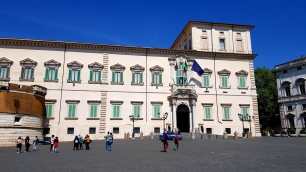 From Palazzo del Quirinale we walked to Fontana di Trevi to try and get closer to the fountain, and to take a picture of us at it, and throw the customary coins in it. We then walked down to the main city and it’s shopping street which is Via del Corso. When we arrived to the street we decided to take a small break at a restaurant, and although just ordering a couple of beers, we were served complimentary snacks, which were much appreciated.

We then set off for the first time to check out the offering of products along the shopping street and found a dedicated AS Roma football club store that was impressive. A store with all thinkable support products for the club, in 3 different levels. On the bottom level they had something they called AS Roma Experience which was pretty cool. Although I don’t follow football or AS Roma, I were close to buy a jersey, but did not in the end.

This time we managed to squeeze us nearer to the fountain.

After some further walking we ended up at our hotel room, where we took a little break before heading out for dinner.

This time we went to a place that is ranked as 141 out of 14 408 restaurants in Rome, on TripAdvisor. We liked the food, service and atmosphere very much, and highly recommend Margot for visitors. 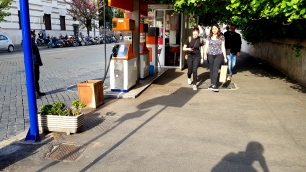 Not a view familiar in Helsinki for instance. A petrol station with two pumps just beside a busy street. 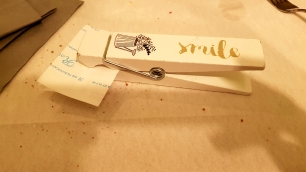 Nice variation to bring the bill.

This Italian way of parking kept amusing me during our trip.

So how did the day look like on the map and in Fitbit statistics?