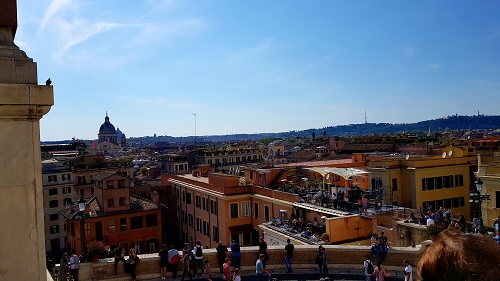 Rome, the city with a rich and colorful history, spectacular buildings, and over 900 churches. We made with my wife a trip to Rome during 18.-22.4,and this is the first of three posts of the trip.

In October 2018 we decided with my wife to take a trip, and as the destination we chose Rome. My wife had been there about 10 years ago, and for me it was the first time there. I had visited shortly Venice, so this would be the second time in Italy. The land where soccer, Ferrari and pizza is noticeable and highly valued things.

Pictures in this post can be enlarged by clicking on them, and captions can be seen with hovering over the picture or opening them.

After dropping the kids to my parents on Thursday we headed to the airport of Helsinki-Vantaa to catch our Finnair flight to Fiumizino, Rome. We have not had many trips only the two of us before, and this was all so classified as a late honeymoon trip for us. As we got married with three children, as the twins were only 1 year old, we then only had one overnight stay in Helsinki.

After arriving to FCO airport, we had a driver waiting for us to drive us straight to the hotel. We had chosen to stay at Roman Dreams. Located only 1,2 km from Piazza San Pietro, it was a very well location. Close to center of Rome, close to Vatican city, but still a bit on the side so that there was peace and quite during evening and nights. After checking in and leaving our bags at our room, we headed to a 4,5 stars restaurant on Trip Advisor, named Su e Giù. A small and full of atmosphere restaurant with very good food. After a big dinner, two tired travelers headed back to the hotel for a good nights sleep.

Soon we will take off.

Beautiful day as we boarded the plane. 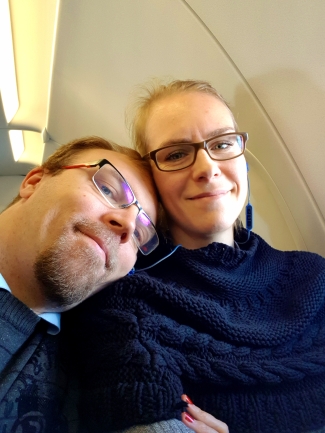 A long short flight of 3h20mins.

Criss cross in the air as other planes were sighted. But what was that black air behind it?

Spotted our planes shadow as we were landing.

Text on the wall in our room.

Pasta Carbonara, and it was GOOD!

Italians park differently then the Finns.

Friday started with ordering online ticket’s to Mvsei Vaticani. We got tickets to a 10:00 am slot, and at that time the time was 9:00 am, so we had to be fast to get going, as we wanted to have a cup of

coffee before the visit. We were also told that the Basilica di San Pietro would close at 12:30 so we knew that we would not make it on Friday. We took the museum on our own with attach audioguide narrative, which turned up to be a very good decision. Because this meant that we could enjoy the enormous museum in our own pace, and listen to the audioguide we wanted to hear, instead of having to hear all the narratives a guided tour, as well as go in the pace of a group.

The Mvsei Vaticani is a enormous place with so much to gaze upon. Room after room, corridor after corridor, hall after hall was filled with beautiful artifacts, spectacular paintings from floor to roof. You are left speechless when looking at the beauty surrounding one. 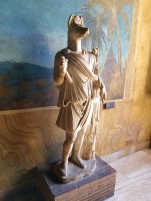 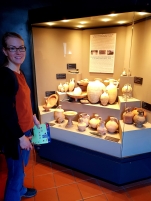 One of so many corridors. 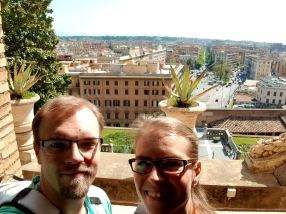 Great view from one window on the tour. 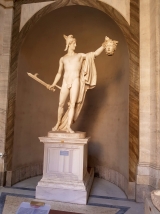 Brutal, but a part of history. 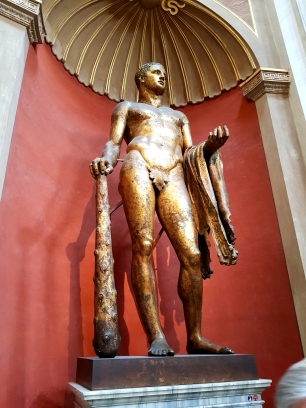 Even the floors had astonishing artwork. 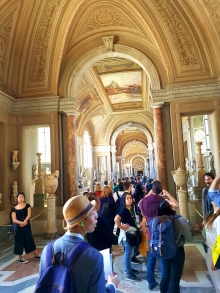 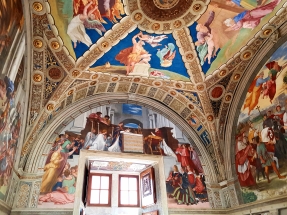 Stairs leading to the Capella Sistina

When the visit came to the end, we headed to Piazza San Pietro to have a first glance of it basilica. I have seen it on the TV and in pictures, and once there it actually seemed smaller then I’ve imagined. It’s not small, but not as big as I thought it would be.

At this point we were hungry, very hungry as we skipped breakfast to make it on time for the entry to the museum. As we were in Italy, there was one clear lunch idea of what to have, so as we found a perfect little cozy restaurant on a side street, we had ourselves a pizza lunch, and they were goooood!

As we at this point was on the other side of the river, on the city center side, we started to look for Piazza Navona. This actually brings up one fuel of interest for our trip. We both with my wife loved the book and later made movie by Dan Brown: Angels & Deamons. And in the film Robert Langdon saved a Cardinal from one of the fountains in Piazza Navona. After taking pictures and enjoying this piazza, we continued our walk to Pantheon, that also appearing in the book. Pantheon of course being the church famous for the hole in the middle of the roof dome. We got a small chock as we rounded the corner to the opening in front of the Pantheon, there was so much people and a long queue to enter. Luckily the queue moved on rapidly and we did not need to wait for long to enter. 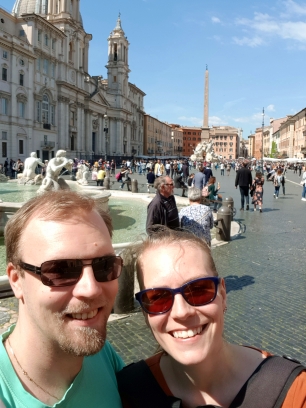 Most probably the fountain where Mr. Langdon saved the cardinal.

First view as we entered the Pantheon.

Picture of the “spotlight” by the hole in the dome.

So many tourists in the square outside Pantheon.

One of many many streets of downtown Rome, very charming.

After the Pantheon we headed forward to Fontana di Trevi. This beautiful fountain, and place was so packed with people, one could not almost get thru at all. We actually just took some pictures and continued on, as we knew we would return, either at a later moment on another day. The next goal on our walk of the day was Scalinata di Trinità dei Monti, or maybe more commonly know; Spanish Steps. As the weather was perfect, clear blue sky, 22″c warm, we held a break after climbing up all the steps, zigg zagging thru the large crowds that were sitting on the stairs.

Fontana di Trevi, me in the green t-shirt on right.

So much people we did not even try to go down to the fontain at this time.

We weren’t the only one’s here either.

Beautiful view from the top.

An obelisk on the top of the Spanish Steps.

At this point the heat of the city, and the effective walking can be seen as a semi-tired tourist couple.

The last place of our Friday tour was Piazza del Popolo. At start or end, depending on from where you look, of the main shopping street of Rome. Piazza del Popolo was also mentioned in the book Angels & Demons. This was a very wide open space with a lot less people, so for me it felt almost under appreciated by the tourists. But it was still a very beautiful piazza. 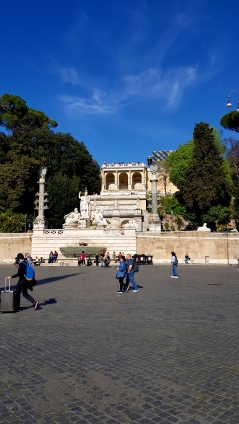 At this point our first day walk had came to the end, and we started to head over to our hotel. On the way decided to take a break and enjoy a cold birra. We found this charming boat bar called Baja. At this point the beer tasted heavenly, and the break gave us the needed boost to make it back to the hotel. A little more relaxing and then we headed out for dinner #2 in Rome. This time we went to Ristorante Raf. Although it was ok, it was maybe the worst restaurant experience during the trip. The staff was some disorganized, the price was a bit high and the bacon burger I had was not very successful. My wife ordered a risotto, which she liked, so at least that was good.

A well deserved “pit stop” on the way back to the hotel.

Cozy bar Baja, which was a river home/boat/restaurant.

Dinner risotto my wife had.

So how did the day look like on the map and in Fitbit statistics?