When madness and reason battle out, it’s good to let madness win once and a while. This all started when I saw a tweet from the crew of the show The Grand Tour. They invited people to come join them filming an episode here in Finland.

One thing led to another and soon I was discussing the possibility to participate in this, both at home with my wife, and with my longtime friend Miro. When our planned budget didn’t make the

flight tickets, we almost buried the idea of going to watch the filming, but madness was let loose and soon I was asking my boss if I could have some days off. As there were no obstacles we just started to wait for the day, and the day was Wednesday 2.11. After dropping of my 3 children to day-care in the morning, Miro picked me up at home, and the long drive to Lapland started at 9:20am.

As we set the cars navigation to the hotel we reserved, the result was 1 210km until destination. No biggie. 😀

We didn’t come far before we decided to take the first break, to get breakfast and fill the gas tank. After that we sat down to drive, and drive we did. On the way, up there was suddenly a traffic jam which’s seemed to could have took a long time. But with some luck we managed to avoid it with a small detour, that didn’t add any time to our drive. The next stop was made at a gas station named ABC Pulkkila, 460km later. After a refreshing late lunch, we continued the drive with me behind the wheel. At this point we had approx. 556km to go.

Navigation as we started from Espoo.

After Jyväskylä we had great conditions to drive in. 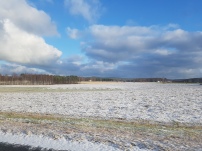 After Jyväskylä we had great conditions to drive in.

An accident almost had us jamed, but we managed to avoid this in the last seconds.

When you get this out of civilization, the darkness can be overwhelming, but everything went fine. On the later part of the drive we had to swerve a fox and 2 reindeer that ran over the road in front of us.

We had good luck with us because the weather was good the hole day. Some light snow came down at a few points, but that was no problem. In the other end, where we started from there was a big snow storm in the great Helsinki area, which we managed to escape from. 1 094km later the joyous sight of our hotel appeared. At this point, the time was 10:45pm, and we had been driving for 12h19min during the day.

We were hungry, again, but there was no kitchen opened, so we settled for a beer at the brewery bar, and got to listen to some local karaoke. Then our beds called out and it was time to rest. The hotel room was good, and the only thing I would have wanted better was my pillow, but I found a spare one in the closet and that was enough for me, so eyes closed and a good night’s sleep began.

The next day we took a slow morning, and eat a big and good breakfast at the hotel. We also found out after the breakfast that someone had been interested of our car, or to be more precise, the possible things inside the car, because someone had been and scratched the snow of some points on 3 windows. It remained a mystery who and why that was made, but nothing was broken on the car. As we were to be at the announced meeting point at 1:00pm, I took a small walk around the area, and ended up taking a 3km light walk. The weather was -2″c, and only the wind was annoying, but that didn’t seem to disturb on gentleman whow walked around in shorts, t-shirt and flip flops. 😀

At 12:00am we set off from our hotel to the meeting point for the filming. Not so surprising there was a lot of cars and people there, and more of what happened then, is … not going to be told, as the element of surprise is to be held up, for when the episode is going to be aired. But what I can tell you, is that it was fantastic to be in the audience, to experience the filming, to see the trio Jeremy Clarkson, James May and Richard Hammond live. All three of them are great professionals, and their humor is live as hilarious as in the shows. I’ve participated earlier in some filming of Finnish TV-series, but none of them compares to this one.

After several hours, the filming was done and we got back to our car. As there was a lot of standing during the filming it was nice to get to sit down again, although it’s ironic to say it, as I just the day before had sat in the car for over 12hours. We drove back to our hotel, for some food. The menu looked good and as we were in Lapland we decided to go for something locally flavored. They had reindeer burgers which we took. As I often eat a bit more then other’s, I ordered mine with an extra beef, and double up the French fries. As the waiter brought our food, the cook had sent a message to me, that IF I would eat the whole portion, there would be ice-cream as dessert, on the house. Well, that was no problem for me I’ve could have eaten some more which meant that I got dessert as well. NICE. 🙂 A couple of beers and then off to bed because there was a long drive back home the next day.

In the middle of the long line of cars to reach the meeting point. 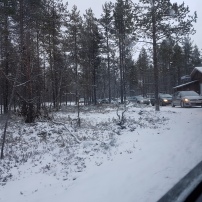 In the middle of the long line of cars to reach the meeting point.

The cook at the hotel restaurant didn’t think i were hungry enough.

We started the day early as we had breakfast already at 7:15, and started the drive back at 7:40am. This time we had filled up the gas tank the day before, so we didn’t need to stop for some time. As our route went so near the Swedish board, we decided to take a small detour over there, just so that we could say that we also went there. 😉 This time we stopped for a late lunch and to fill up the petrol tank at ABC Pyhäjärvi. At that point we also changed driver. The navigation on Miro’s car told us at this point that we had 468km left to go, so off we went. The drive went smoothly and although there was much more variation in the weather conditions, there was no problems this time either.

Precisely at 9:00pm we stopped the car at my home address, and the trip was over for me. The navigation told us that during our journey, we had been driving in total for 25h 35min since start. We had driven 2 252km in total. We have had an average speed of 92,4 km/h, and the car had a 6,8 l/100km consumption of fuel. Happy but a bit tired I carried my bags in and got a warm welcome from wife.

It has been a trip to remember, it has been fun, and interesting. Wouldn’t change a thing of our trip.
Thank you Miro, and let’s do something similar again, but not too soon. 😉