I’ve used Fitbit “semi” smart watches from May of 2016. Since then I’ve had to updated product now twice. So why did I update this time?

In 2016 I took in use a Fitbit Blaze. It was not a smart watch, but smarter than an activity tracker. When purchased it, I had some doubts about it being enough for me me, as I transferred from a smarter watch, startup called Pebble. The most important feature then, was that the watch could be used on one charge longer than a day. Smart watches back then had a battery time of approx one day. The Pebble I had used previously had a week usage before having to connect a charger. The Blaze did have a little shorter usage time on one charge, about 5~6 days. 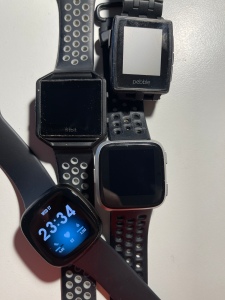 After getting into using the Blaze, that I eventually fell in love with, there was no scenario where I would change to either a “full” smart watch, or down to an activity tracker. Smart watches as they did not advance on the battery time near to my Blaze. And activity trackers did not have the feature sets I expected. Sadly the charging port or dock of the watch, started to have problems for me after some two and a half years of use. As I was happy with the product itself, I decided to update to a newer version of the Blaze, which was a Fitbit Versa at that time. The Versa was more of an update than a new different product. Same functions and features, just looking better, and working smarter.

When purchasing the Versa I made sure that the charging was better, and the problems from the Blaze wouldn’t sneak up on me again. And for the time I had the Versa I’m glad to report, the charging has not been an problem, BUT… one problem did appear.

So one night I woke up as I felt something scraping my arm in the middle of the night. I didn’t want to start to investigate it further right then and there, which resulted in me taking off my watch as that was the thing causing the scraping. Then in the morning I was met with the situation as in the picture on the right. The screen had fallen out of it’s socket, hanging only by a connector. First it seemed that there was just the need to place the screen back in it’s slot. Further investigation revealed that the touch functions had stopped working too.

I was in contact to Fitbit support, as well as Googled around to see if there was some place that could  repair the issue, but to no success. The warranty had of course expired, so there was nothing Fitbit wanted to do either, for the old watch. They did send me a sizeable discount, to purchase a new on from their web store. As there hadn’t been any issues with the watch itself, not taking the display coming loose from frame that is. And making comparisons of prices of new watches from a retailers in Finland, compared to the discount I got from Fitbit, the discount was enough to tip the scale to Fitbit.

Said and done, I placed an order, and 5 days later I received it by mail. What I ordered was a Fitbit Versa 3. The reason I didn’t go for the Fitbit Sense was, that, the additional functions on the Sense, does not work in Finland, so this way I got almost the same product but cheaper. By the looks of it, the new watch does not look that different from the Versa one. Maybe the most noticeable difference is the missing mechanical button. Fitbit has taken the two buttons from the right side away completely, and the one on the left side is made into a touch sensitive, which after 2 weeks of usage, I have to say is not as good as the mechanical button.

Don’t get me wrong, it works pretty good when you get used to it, it’s just not as easy to use as the previous one. Otherwise the new watch is very similar to the earlier one. They made some really good improvements on the software side, and they added some functions. So although the experience is similar to the previous versions, it changed enough to be felt like a new watch still.

This new version has built-in GPS, which I think is really good. What’s not so good is that it’s clearly slower to find the signals, compared to a phone. And it’s not like you have to wait for several minutes, but as your for instance going to escort my kids to pre-school, it’s slow enough for my twin girls to ask many times; “why aren’t we going already?”

In the reviews online, many seemed disappointed by not being able to leave their phones at home, as the watch still needs the phone, if you stream music during your workout, but for me that’s not an issue. I would carry my phone with me even if I could stream the music straight from the watch. Returning to the battery side, this has a uptime of 6 days in their advertisement, and I’m happy to report, that is pretty much what I have reach. That being having at least one activity everyday with GPS active.

There was some doubt on my part about the strap, as the one coming with in the box, not being a standard watch strap. they call it the “infinity” band, and it’s just this knob that’s pushed thru the holes, and then the band folds inwards, creating this lock mechanism. One reviewer on the net said he have had problems with it, getting loose, but I have not. For me the locking mechanism has worked fine, and the watch has securely held it’s place on my wrist, so no doubts anymore. The haptic engine has been improved, and I like the change. It’s more destinct and stronger.

Something I did not see or hear about in the reviews, is the “press to return to the homepage” function. So saying I’ve open the menu, and gone into Alarms for example. By pressing down the watch against my arm, it vibrates and returns me to the homepage, and this I like A LOT! It eases the need to use the touch sensitive button, that’s not my favourite change as mentioned earlier.

So to round things up, I’m very satisfied with my new Fitbit Versa 3, and hopefully this will work for a long time, as I still don’t have any deep desire to get a “full smart watch” that is needed to charge up almost every day.