The story when a strong character, ice hockey professional meets alcohol, drugs and authority. When the ingredients don’t mix for success.

Jere Karalahti! A vivid figure from Helsinki. From the suburbs came a boy who among much more, was a great ice hockey player. The pathway for this gifted player was glooming all the way to the horizon. The thing that interfered and cut the great success story short was alcohol and drugs. 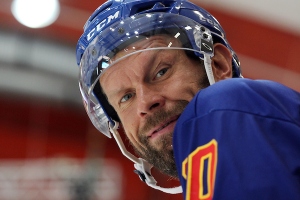 When I was a kid, I was a supporter of Helsinki club Jokerit. The archenemy was the other Helsinki based club of HIFK. The years were around 1991-1999. At the time I were able to mention some of the players in the rival team, but one came easily to mind if asked, and that was Jere Karalahti. He played tough and good ice hockey as a rock hard defence man. Often balancing on the line of clean and dirty.

Jere’s been in the headlines of newspapers and there’s been this and that. If one would have asked me at the time what it was, I would have said that it was alcohol, and at a later point I would have added drugs, but I did not follow him that much. The full extent was a bit of chock for me, while listening to the audiobook.

The book is written by Aki Linnanahde, a producer, host and reporter, mainly known from radio. The audiobook speaker is Ville Tiihonen who does a very good work with the book of JERE. He’s voice at times even fools the listener to think it would be Jere himself. The audiobook is 13 and a half hours long, so there’s a lot to listen to. The book focuses on the party side of Jere’s life, although it strings it together tightly of his career as a hockey player. Deep ice hockey analyses is not to be expected while reading or listening to this book. As Jere has represented 10 different clubs, I personally would have wanted to know more of the hockey side, but the book was interesting enough, to keep me drawn into it.

What I did not like was, specially in the first half of the book, the constant reminding and repetitive of Tapulikaupunki, and the harsh life he had endured during growing up. It was presented from the get go of the book. Another side that was too highlighted from my perspective, was the glorifying of the life fuel’d by alcohol and drugs. Only partly, nearing the end of the book, when he writes of getting really ill, does the tone change. I understand that it’s connected to the mental side, that was lacking, and made him continue the destructive lifestyle. When being one of the lucky ones, to have survived a 8 day coma, and actually getting back to good health, as well as realising the hurt he made to himself, he could have placed the side notes of the danger earlier in the book. After i wrote this review, i read another review, and found another review that as well disliked the way, Karalahti really didn’t notify and highligth the needed changes and danger of substance abuse. 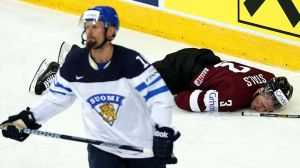 Jere is not a player who can by himself fill a room with trophy’s and medals. He has still achieved a lot of success. With the national team he has 3 silver and one bronze medal from World Championships and with 4 medals from the Finnish SM-liiga (1 gold, 2 silver and 1 bronze). There’s no question about it, Jere was a very very talented player, and he could have made a long and glorious career in the NHL. Now due to drugs and alcohol, it ended up to be only between from 1999-2000 season to the 2001-2002 season. During his years on the other side of the Atlantic Ocean, he represented Long Beach Ice Dogs in IHL. In the NHL he represented Los Angeles Kings and for one season Nashville Predators.

Luckily Jere found a meaningful new love, which complemented him to his side. Although not good that he came so close to death, this horrific event changed his life, and made him sober up and quit drugs. I hope Jere can and will use his strong character, and broad influence to help others who either are walking, or in the danger of going down the same path, and helps to jump off that dark path.

One thought on “JERE”